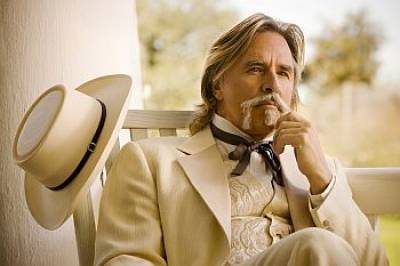 Approaching 60, but looks older (bourbon, cigars and paranoia take their toll). During most of the 80's he worked for the Botha regime in South Africa, trying to get them out of the financial shit they were in through an “ultra green revolution”, increasing agricultural yield to insane levels (which involved hyper-photosynthesis and black plants with black leaves and black appetites and all sorts of cool shit).

It was towards the end of that glorious era that he met, befriended and eventually mentored the brilliant and young Dr. Jenkins, M.J.'s father.

When Darkleaf project went belly up along with the apartheid, Bubba moved back to the States, where he spent a few years figuring out he doesn't get along with brain-dead academics or narrow-minded CEOs. He thought he had found salvation during the 90's, as he went through a chain of enthusiastic entrepreneurs and megalomanic startups.

It was towards the end of that glorious era that he met, befriended and eventually impregnated his brilliant and young lab assistant (this immediately raises questions: did he also shtup Dr. Jenkins? Is he really M.J.'s father, while his supposed father is in fact his mother? It's all a cookie away…), a teen prodigy of the negroid persuasion. Instead of destroying both their careers, Bubba took care of things, arranging for a quick embryo harvest. Maybe it was the closest thing to an abortion they had on campus, but more likely it was the old paternal instinct, combined with availability and masked as hubric pride over one's DNA.

Whatever it was, the mother did not particularly approve. There was an altercation, aggravated by overzealous ethanol consumption, raging hormones and the threat of jail time, and he ended up choking her to death. Getting rid of the body was as easy as was getting a new lab assistant, and for a while things were good again, but then the hi-tech bubble burst and Bubba sank into a deep depression, wallowing in self pity and regret for almost a decade.

And when he finally managed to drudge himself out of his depression and put on a suit and smile and look for a job, the only thing on his mind, the only thing keeping him moving, was his lost offspring. The startup was long gone, all the frozen embryos sold under the table, and it took a great deal of sleuthing (chromosomal and otherwise) to locate his genes in an off-shore department of defence breeding complex, way over in eastern Europe.

Bubba pulled some strings, used some contacts from his past, showed some talent, and got a job with the D.O.D. - “treating” modified humans in Serbia. Within months he made contact his two “daughters”, Helena and Katja (allegedly twins, factually clones of the frozen embryo, quite possibly part of a larger batch), both trained assassins, one modified with chameleonine super powers. He introduced himself as someone who knew their poor dead mother, and being the first and only person to show them affection he quickly became a surrogate father figure to both.

A short period of prosperity followed, with the only cloud being the dwindling funding and the lack of vision on the part of the folks in charge. This led first to the facility being moved to the U.S., later to a focus shift from humans to poultry, and eventually to it being taken apart and sold for parts in a yard sale. The girls and the facility were sold to the C.I.A., who appreciates chameleonine powers, while Bubba and the poultry went to Slim Gene.

For a while Bubba tried to rectify this situation peacefully, by talking to wide eyed entrepreneurs, convincing them to pivot into the security business (guard chicken!) and buying off his girls from the C.I.A. (important research!), but the more things progressed, and especially when Slade Industries (which he royally fucked back in his South African days) became involved, he realized it's time for an exit strategy.

With the girls help he caused a terrible accident at the facility, faking both their deaths and taking them along with himself off the grid. They roamed for a while, then settled in back at the (now deserted) facility. They brew their own Sinequanon treatment and their own moonshine and they do genetic experiments on chicken. Up until now they have been rather happy.