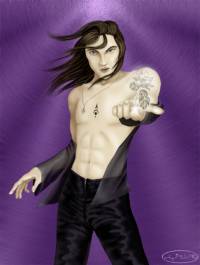 Heir to the royal throne of Latveria, the medieval shadow in which Fiona chose to spawn him out of the seed of King Albrecht. His mother is gone now (we do not mention her in the palace), his father is an old cold and dismissive bastard, and it's little bloody wonder he finds Charles and Charlottesville to be dramatic improvements.

He does True Art.

The Prince's full background has yet to be revealed, although an abundance of extra details are hidden in this site somewhere. In the meanwhile Charles recently found out that King Albrecht had three older children, from his first wife, but that they all died one after the other (starting with the wife) when Guinevere, the new queen showed up. These mysterious deaths, along with her alien and aloof manner and the rumors it attracted, are apparently what made the King throw her in the dungeon. Faith has admitted this to be a formative event in his life, and the realization that his mother was not at all encumbered by this damn well confusing.

As if a Prince of Amber needs permission.