A New York Vampire, a 10th Generation member of Clan Ventrue. Her Disciplines are Temerity, Exposition and Embellishment.

Magenta Jones used to be someone else, perhaps someone like Hope Mirrlees:

a very self conscious, wilful, prickly and perverse young woman, rather conspicuously well dressed and pretty, with a view of her own about books and style, an aristocratic and conservative tendency in opinion and a corresponding taste for the beautiful and elaborate in literature. 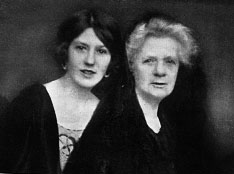 And considering her background (and Disciplines!) perhaps she should have become someone else, like a |Torie. Instead, she was embraced Ventrue, and has found herself forced to devote far more of her considerable creativity to book-keeping, business management and identity politics than she did while Warm.

Hope went Cold sometime in 1929, after Ellen's death (“finding refuge in Catholicism” my ass), in Paris, although she didn't officially die until the late 1970s - being legally alive was too useful to give up. She did however fade from public and social life, becoming an almost unknown recluse. Lin Carter reprinted her novel in 1971 without her permission because he had no idea she was still alive (“Alive”, that is), let alone that she'd been living (“living”) in the US since the mid nineteen thirties.

As Hope faded from the world, a bright new persona emerged: Mrs. Jones, the nocturnal butch counterpart to Hope's sunny femme. Widowed, business-like, she presented herself first as Hope's personal assistant, later as her agent and literary executor. Mrs. Jones uses many different first names, of which _Magenta_ is her favorite if not most common.

Magenta spent the first years of her Childe-hood in Paris, coping with her transformation by trying to be a good lackey to her Sire, the Victorian Ventrue Kriemhild, who had chosen to embrace her because she was pretty, rich, brilliant and vulnerable.

By the time Kriemhild's ambitions got the better of her, Magenta had formed some alliances with some American expatriates, and used their connections to relocate herself to Boston.

In Boston, she spent a lot of time being party secretary for the marginalized ex-NYC Ventrue, futzing about and doing crap jobs like babysitting.

Since the 99' nyc take-over, Magenta has been very busy.

The Burgundy Trust owns several buildings in the four boroughs area. Four of these buildings - The Mamuwalde hotel in Harlem, The Colan building on 3rd Avenue and 28th St. East., Polidori Place on West 115th St (near Columbia University) and a building in Brooklyn that containes a cafe/bookstore/club called Le Fanu - have been modified according to Magenta's specifications and contain four spaces prepared for her use - one of each of the following three types, plus one extra:

Magenta feeds off writers. To taste better than water they need both talent and the perseverance to actually put together something longer than a sentence. To get blood, Magenta tries to attend four weekly writing workshop groups, using different clothing and hair styles to avoid recognition, she hangs around publishing parties and writers' seminars and conferences.