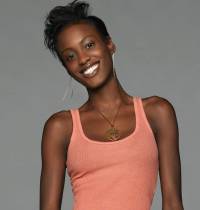 The one who worries.

Bethany is Abigail's sister, conceived as part of the invisible girl project. While Abigail (and presumably, a large number of non-viable others) were modified, Bethany (and others?) wasn't; she was supposed to serve as the control in the experiment, and was kept on and trained so that Abigail would have a companion, and also because the project supervisor, Doctor Thatcher took an unusual personal interest in both girls.

Once the project was disbanded and Bubba absconded with the girls, Bethany found herself taking the role of Bubba's assistant/caretaker/supporter, as if to compensate for Abigail's favored status.

Has all of Abigail's ninja skills, but is even better in the medical, shotgunning, poultry husbandry and video-downloading departments. Because someone has to be.