Panic in the streets of Hyderabad

Smith, Jones, Jeremy Piven, Marilyn Monroe and a Cat walk into an embassy. Someone decides it's a bad joke and gives order to bomb the shit out of the embassy. Smith grabs his childer (who are resenting his inconsiderate behavior, which he ignores, which they resent) and starts walking briskly out of the building. Magenta, her paranoia pumped up by the chaos and the absurd sensitivity of her enhanched senses, freezes, transfixed by her search for hidden explosives and other obscured threats.

As Smith and childer approach the door, a soldier strongly advises him against it. It's hell out there. To everyone's surprise, Smith choses this moment to gain respect to the concept of free will, so instead of pwnifying the soldier's sorry ass he tries to do what ordinary people would do in the same situation - lie. In an extreme attempt to appeal to the guy's reason, he explains that he has a bad hunch about this place and must therefore leave it at once, but by then the soldier has gotten lost in Marilyn's th^H^H^H eyes.

Magenta finds her explosives, encased in a shiny metal shell that it being hurled down at them from high up in the atmosphere. She manages a muffled noise, and the Cat scratches them a path into the Umbra, which they scramble into before the soldier's startled, soon-to-be scorched eyes.

As on the other side of the veil people at the embassy burn, the cat leads them on a literally torturous path through the echoes of incinerated souls, trying to find a route to the US. Eventually they find a man being burned alive in a necklace of car tire and gasoline, and emerge on the docks of Los Angeles, witnesses to a brutal gang execution by a crew of Crips.

Marilyn freaks, and Magenta grabs her weapon and submachineguns both the gangers and their victim to oblivion, despite protests from Smith. Smith checks out the booth of the gang members' car, where he finds some weapons to arm himself and the kids (including a wakizashi). Then he drives them away in the comandeered car, heading for the home of his good buddy, Leo D. On the way, Magenta tries to comfort Marilyn with some tough love, while the kids actually take the opportunity to ask some awkward questions (Marilyn is shocked to learn it's 200x already).

The streets are mostly deserted, except for national guard jeeps, vigilante mobs and rioters, and on the car's radio, Magenta only finds bland reassurances from the government that things are getting better and the nation is pulling itself back on track after the attack (although no one explains what attack anymore).

At Casa DiCaprio (actually one of Smith's safehouses - DiCaprio just stays there as refreshment), Smith finds a strange man chilling on the lawn, who soon becomes his best buddy. Apparently, a roving gang has taken over the mansion and is now using it as their regular hangout; Leo is no more, having been torched in the backyard, but the gang is still hanging on to his terrorized Israeli girlfriend (let's call her Bar). Smith announces that he is running the place now, and decides to press-gang this gang into his army. As his first executive act, Smith executes the gang member who killed DiCaprio. He comforts Bar and asks her if she's not being kept there against her will, offering to take her somewhere else if she should so wish.

As the entourage are settling in among the gangers, the cat slips back into the Umbra and tries to retrace the whole route from the terrified phone-call at the embassy, back to the person who actually gave the command to bomb it. It finds the dude, apparently on an aircraft carrier and when it sends the image of his aura to Magenta, Magenta confirms him to be the Potter.

Intent on making their way to New York, and unable to learn much more about the descent of the nation into chaos with a thin veneer of martial law, they decide to set off across country in the Winnebago Smith had stored at the place. Smith asks Bar if she would join them, and she agrees. He also recruits the first friend he made among the gang as a bodyguard, and with the two as daytime drivers, the whole retinue sets off.

The travel across the country is relatively uneventful, although there is a growing sense that things are fucked up not simply in physical but also on metaphysical levels.

While stopping to loot-and-leave-money at a gas-station somewhere in Oklahoma, they run across an old-timer who tells them that not many people travel around “these days” and who doesn't remember a president later than Ronald Reagan; from his story, it seems like the “trouble” started with the cold war warming up, not a wave of terrorist attacks. 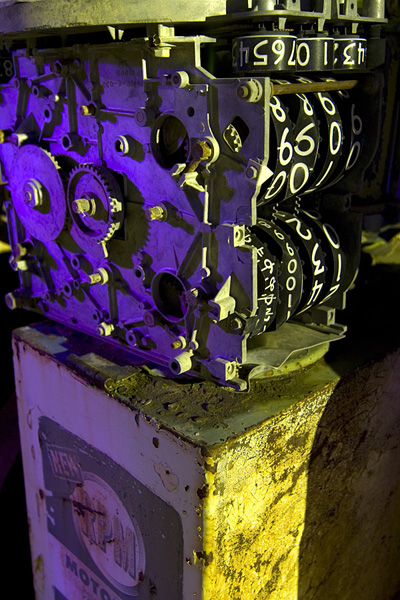 From the Lost America site

They also notice a sudden shift in their Winnebago as its model deprecates by 20 years overnight.

Approaching New York, they take a detour to Sisko's mountain, now visible. Leaving the childer with strict instructions not to drain Bar and Bruno (the bodyguard), Smith and Magenta (with the invisible company of the invisible Cat) make their way up to Sisko's house. There's someone inside, and while Magenta walks in through the front door, Smith sneaks in through the upstairs window (have Wakizashi, will Ninja).

The stranger is a vampire who introduces himself as the count, or rather the Comte, specifically the Comte de San Germaine; Magenta recognizes him as the vampiric supervisor who gave the order to wipe out the lab in Golconda, Illinois.

The Count suggests trading secrets, but offers little that is not already known. Magenta threatens his life. hoping to cut to the chase, and also suggests he might join them in going to New York. The Comte does warn them that New York is festering with special ops (government vampire hunters).