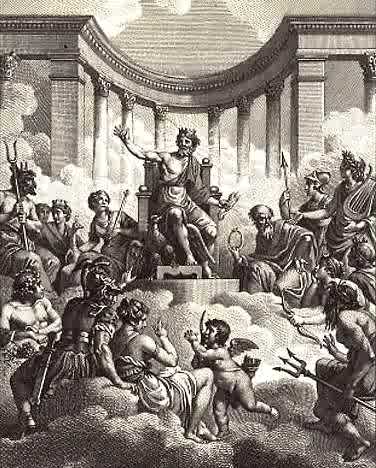 The mythologies of many human cultures seem to feature a group of recurring characters, not just recurring roles or archtypes but actual people. Whether those people are real gods, manifestations of some supernatural phenomena or just a bunch of reincarnating superpowered immortals is an open question. While newbies tend to call these beings “gods”, the wiser amongst them prefer to refer to themselves as The Twelve. Other names less commonly used are The Pantheon (trite) and The First Generation, alluding to these being perhaps the first generation of humanity, or of intelligent life on the planet.

There probably aren't exactly twelve of these people, although there probably aren't more than thirty; they have existed for so long that they regard each other as brothers or sisters, although they have taken on all the other possible family roles (each one of them has probably been parent, sibling, child or lover to any of the others at one time). Each of them has a pretty constant personality, and their gender is a consistent aspect of that personality. The male-to-female ratio appears to be about even.

The Twelve reincarnate in human avatars, and grow to adulthood unaware of their true identity, at least until they are “tapped”. We don't know how a new avatar is usually “tapped” - both avatars seen so far in the game have been tapped by Paul Jordan, whose powers appear to derive from a different group, the shadowy alien The Watchmen. Persumably some psychic power is exercised by a mentor who was previously tapped. Another open question is whether the Twelve reincarnate indiscriminately or whether an avatar is fathered by another Avatar (an open question because Richard never knew his parents).

Richard "Ringo" Starsky thinks that he is the avatar of War, although he's not sure if he's more Ares/Mars/Tyr or Zeus/Indra/Thor.

So far, we've also met an Avatar of the god of Parties, Sex and Wine, Dionysus.

He has no idea why he was called Siddhārtha by a Hindu(?) Cabi; a shaky theory is that Siddhārtha == Buddha == an Avatar of Vishnu. Specifically, the penultimate Avatar of Vishnu, proceeding the final Avatar, “The Destroyer of Foulness”, who will end this wicked age.